On August 17th, ten rabbit advocates — Stephanie & Phillip Lodge, Linda & Mark Gardner, Katie Straka, Kyra Kester, Christina Collins, Lane Ferrante, Cindy Slezak, Stephanie Smanto — gathered in Cleveland, OH, to protest the Woodmere Whole Foods carrying domestic rabbit meat in their meat counter. This protest was in unison with about forty other nationwide protests at Whole Foods (WF) locations. Most of us were a little nervous at first; until we all realized we were in the same boat. 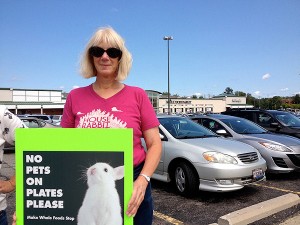 We decorated all our cars with rabbit ears and pink noses and then placed large posters visible for anyone to see. The store manager asked us to move away from the front of the store and explained we could stand on the grassy areas in front of the shopping plaza facing a busy Chagrin Blvd.

The manager came out again and tried to make us leave the area where he told us we could be.  Mark Gardner said, “When you get the owner of the property to call me and ask us to leave, we will”. The manager got a bit frustrated and said he was calling the cops.

END_OF_DOCUMENT_TOKEN_TO_BE_REPLACED

Rabbit protection groups around the country are planning on coming together to tell Whole Foods Market what rabbit lovers really think about Whole Foods’ decision to start selling rabbit meat in their stores.

This peaceful leafleting/protest is being coordinated by the House Rabbit Society.  Find out much more at rabbit.org’s Day of Action.  For details about our Day of Action in Ohio, please contact Stephanie Lodge. 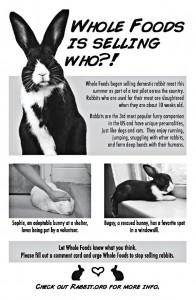 Companions Are Not Food

Whole Foods is testing the market for “rabbit”.  On behalf of rabbits everywhere, and your own special pets, send a clear message to Whole Foods about the marketplace.  DON’T SHOP where these wonderful critters are sold as meat.  Let them know they are losing your business — and your loyalty.

See more about the campaign to Boycott Whole Foods, supported by the national House Rabbit Society.