We would like to say a heartfelt good bye to Taz and Scar.  Binky free sweet babies!

Tazwell (gray and white) and Scarlet (black) have found new life together as seniors. Scarlet, always a shy bunny, never found a permanent home. She was always passed over for a cuter or more sociable bunny. Tazwell is the last bunny we rescued from the big Elyria hoarding situation of 2005-2007. He, too, was so shy he wouldn’t let anyone touch him and spent most of his days inside of a hidey box. 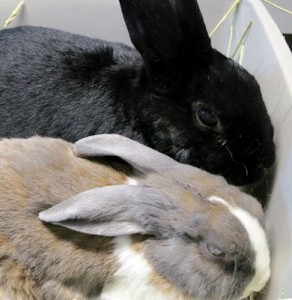 When Taz and Scarlet were introduced to each other in 2013, it was instantaneous friendship. Taz is now 100% blind in both eyes and afraid to venture out on his own to explore. Scarlet is now his “eyes” and challenges him to engage in new adventures like jumping on top of boxes and meeting new friends.

They snuggle together, protect each other, eat each other’s food, and do things they wouldn’t otherwise do on their own. 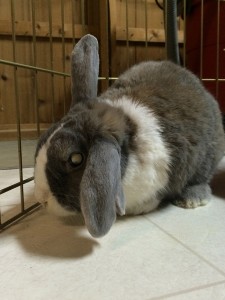 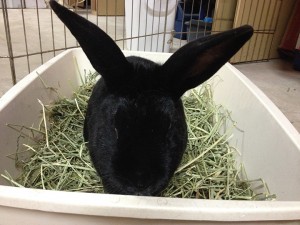