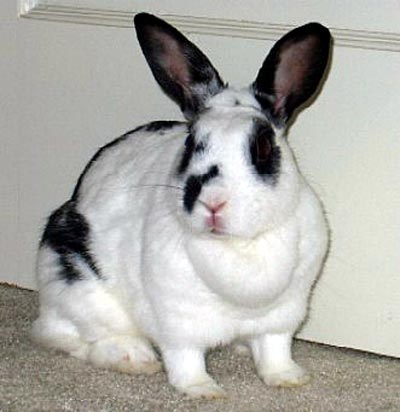 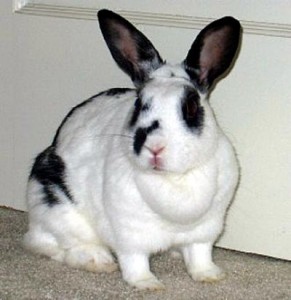 Like every foster rabbit that comes to us, we had such high hopes when you came into our home.  We’d get you ‘altered’ and healthy so that a loving family would give you a forever home where you’d live the life of a house rabbit.  But for one reason or another, perhaps you were too shy or old, or easily frightened, or you used your teeth to express yourself when a growl would suffice, no one came to adopt you.

So it was with Belle (aka Mrs. Bootski), a stray who was captured in Bellefontaine after evading her captors for three cold months in 2001.  Throughout February, March, and April, neighbors had spotted her roaming the area before she was finally corralled and caught.  Even though we were 100 miles away, we were the only foster home that had room for her, so we made the trip to pick her up.

It was obvious that Belle was extremely shy and unaccustomed to human affection.  Despite our best efforts to socialize her, she didn’t warm to anything more than a nose rub at feeding time.  She wasn’t even interesting in exploring during her free time.  As the weeks turned to months, and the months turned to years, we knew it was going to be hard to place Belle into a new home.  After three years of zero interest in her from potential adopters, we decided that even if Belle was adopted, it would be especially stressful for her to get re-settled, therefore she joined our sanctuary program.  She moved into the living room where she seemed to enjoy interacting with the dogs, cat, and (somewhat) with us.  Still, she didn’t come out of her x-pen when given the chance, and became stiff as a board when picked up for cuddling or grooming.  Although she was constrained by the restricted liberties of being a foster, she finally settled into her routines and became comfortable with familiar surroundings and with the people who cared for her.

One night about bedtime, Sue noticed that Belle hadn’t eaten her veggies or her pellets and she seemed to be uncomfortable.  I picked her up and held her while casually examining her.  She was cold and lethargic, so I let her snuggle into a plush blanket on my lap and gently stroked her head and ears while she relaxed and her eyes started to close.  Twenty minutes later she let out a deep sigh and she died.  Despite all of the euthanasia events I’d tended to in the past with rabbits and dogs, this was the first time an animal had ever died in my arms of natural causes.  Thankfully, it was a quiet and peaceful passing, although it still left me feeling empty and helpless in the face of “The Black Rabbit.”

I am so very grateful to the sponsors who contribute to the sanctuary program.  Without your support, taking care of rabbits like Mrs. Bootski would be completely up to us and would undoubtedly limit the number of other fosters that we can care for and find homes for.  Because they are generally long-term residents, there’s no way for us not to become attached to them just as we do with our own pets.  Currently three of our nine fosters are sanctuary rabbits living out their days by keeping us company.  Sadie, Sylvester, and Pumpkin join me in thanking their sponsors for all their help!