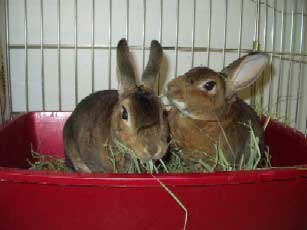 I had to put Patty down this morning. In two days, her back legs went from being stiff with arthritis, to not working at all. She could not walk and I noticed she was having trouble breathing. By last night, she had started to have some thick nasal discharge and had lost interest in eating. It was her time. She was over ten years old and had fought cancer for two years. (Thank you very, very much to Dr. O, Dr. Tim, and the fantastic staff at the Bird & Exotic Wellness Center in Toledo. You guys gave her another good two years with me that I am so grateful for.) (Thanks also to Dr. Clark and his staff at the Bellevue Animal Hospital for Patty’s initial spay and tumor removal, and for helping her to the bridge this morning. We lean on you a lot and want you to know how very much we appreciate your putting up with us!) 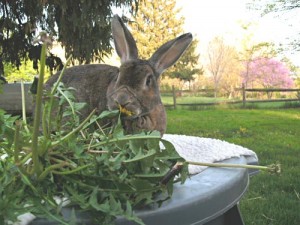 Patty was named after my mom (it gets hard coming up with new names for all these guys). She was the last survivor of a group of six we took in when their owner was evicted — the first group rescue to put us over the three-foster-bun limit that Sue & I were supposed to operate under. We’ve never been under four fosters since then! She and her five relatives were surrendered by their owner after a BHRS member contacted me for help.

That contact in itself is a long story, some of the details are still secret for privacy reasons, I think. (The person who saved those rabbits is on our mailing list – THANK YOU for getting them to us!). They all lived outside, in a wire run in a backyard in Toledo where they were fed day-old donuts from a bakery where the owner worked, and only randomly received water. The waste from the rabbits simply piled up so high in the run that the buns were basically living on a large mound of droppings, with very little room above their heads. Breeding was not controlled, and the rabbits were occasionally harassed by neighbor kids. They were all rex rabbits with thin fur on their feet, so everybun had sore hocks. Since they weren’t used to having clean water, they were all accustomed to drinking their own urine, which all continued to do while in our care. It’s gross until you realize that this behavior was one they developed as a means of survival.

Of the six rabbits, three of them were already so old that they were unlikely to be adopted: Granny was eight, her daughter Annie was five, and the granddaughter Patty was over three. None of them had been spayed and I knew cancer would be a risk. As it turned out, all three of them succumbed to it. Despite immediate spaying, (all of them had ovarian or uterine growths discovered during the spays), Granny died in less than a year, but Annie and Patty became bonded here.  Annie died last fall. Mammary lumps were discovered on Patty’s abdomen in December of 2007 and her primary veterinarian considered her condition terminal, the cancer having spread to her lungs. Although I don’t second-guess my vet, *something* prompted me to get a second opinion this time. A second x-ray did not indicate presence in the lungs and the doctor was willing to remove the growths. Pathology showed it was indeed a fast-spreading type of cancer. During the next 18 months, she had five more surgeries to remove the recurring tumors, in addition to hormone therapy, in an attempt to control the spread of the cancer. Even so, Patty remained a happy, curious rabbit. In mid-2009, when the lumps appeared again, Dr. O. and I decided that yet another surgery was not a practical option for a rabbit of her age and condition. It took from then, until now (December 2009), for the cancer to take over. 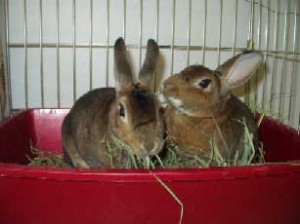 During her stay with us, Patty was a bit of a celebrity. She was never afraid of our four large dogs, and she seemed to like interacting with them, climbing on them, jumping over them, and moving their tails whenever they got in her way. With her soft rex fur, beautiful long eyelashes, and super friendly disposition, she was always popular with kids when adopters would visit. But younger rabbits were always chosen over the old ladybun. She became very attached to me, and loved to share mutual grooming sessions if I would lie on the floor with her. She also insisted on being fed FIRST, and was not afraid to follow me around the foster room until she was served. Once I was being interviewed for a documentary on fostering (it’s a work on hold for now), and I decided to sit on the floor with a rabbit sitting on a bale of hay behind me, making an interesting backdrop. I picked Patty because I knew she would sit still eating hay and not go exploring. Suddenly in the middle of questioning, I felt warm breath in my ear and the distinctive touch of a raspy little rabbit tongue licking me. She decided to start grooming me during the interview, right when I was responding to “What is the most rewarding part of fostering?” Of course, I had to answer “Having a foster rabbit giving me bunny kisses.”

See you at the bridge, Patrice! Be good!

Thanks again to everyone. An especially BIG thank you to the sponsors in our sanctuary program. The cost for Patty’s many surgeries and meds would have overwhelmed us if it were not for your extremely generous support. All of BHRS’s fosterers are tremendously grateful for your contributions to the care of these very special rabbits.

Patty came into foster care in 2003 as part of a family of buns that were in danger of being released into the wild due to the owner being evicted. All 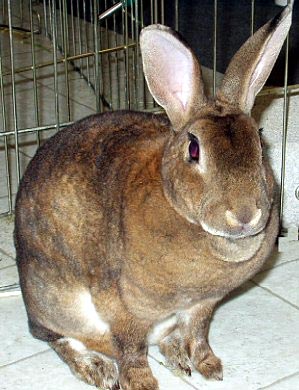 were in a poor condition, having survived on little or no water and a diet of stale donuts brought home by their owner. They had lived outdoors in a run that was more than half-filled with piles of feces, so each of them had some degree of sore hocks. The three oldest of these buns were Granny, Patty, and Annie, who were all over the age of five and had not been altered. Annie’s leg had been broken at some time in her life and had healed at an almost 90 degree angle from normal.

Because of their age, we knew they would be difficult to get adopted. Unfortunately, Granny died eight months later from lung cancer. Annie and Patty bonded together and despite their wonderfully friendly personalities, they were repeatedly passed over by adopters in favor of younger buns. In 2006, due to their advanced ages, they were added to the Sanctuary program as un-adoptables.

In November of 2008, Annie became very sick with lung cancer and had to be euthanized. Patty has had three mammary tumors removed over the last two years; however, her health is good and the cancer does not appear to have spread to her lungs. She is a beautiful satin rex girl with long, gorgeous eyelashes! We watch her closely for signs of any additional tumors. All of these girls are textbook examples of why it so vitally important to have pet rabbits (especially females), spayed as soon as they reach adulthood.