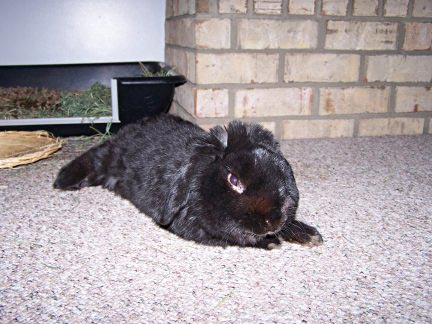 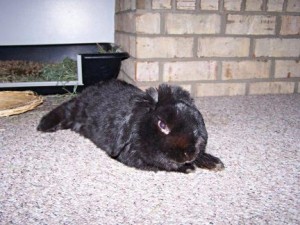 Harvey is a mini-lop who is about five years old. He has a deformed jaw which
causes him lots of dental and ear problems.

Since his jaw doesn’t line up, his teeth cannot wear properly and he has to have his molars trimmed every two months by his veterinarian. Due to his dental problems, he cannot eat greens like a normal rabbit — they become impacted in his mouth. In order to get some veggies in him, he gets pure canned pumpkin instead of a salad each morning. He loves the pumpkin and gets an orange chin until he has a chance to groom himself after eating..

He also has chronic ear problems which sometimes lead to respiratory infections. His ears get flushed at the vet every two months and he is often on antibiotic ear drops. His ears also get cleaned daily at home. Most recently, he had a respiratory infection that required twice-daily antibiotic injections for nearly a month to clear up. His medical bills will always be ongoing and can be quite expensive.

Throughout all the poking, prodding, digging and cleaning, Harvey has kept his sweet personality. He loves to be petted and jumps on the couch to watch TV in the evenings.