It is with great sadness that I report the passing of one of Buckeye’s long-term sanctuary residents.  Margery Pontiac was assisted in crossing the Rainbow Bridge on Friday, April 20th, 2018.  Margery had developed a cancerous tumor inside her lung, which was draining into the lung making it difficult for her to breathe.  She saw Dr. Riggs a few times in February and March to have the fluid removed, but it got to the point where we knew a hard decision had to be made.  This medical issue could not be cured, so we chose to say good bye in order to save her from further suffering.  To say she was adored would be a great understatement.  Margery was loved by many people.  She lived with Kristen Doherty for ten years, so she was at least eleven or twelve years old.  Binky free, beautiful girl!  — Stephanie Lodge

Margery Pontiac (named after a Holstein cow) is a beautiful dark brown agouti rabbit with vision problems. Ideally Margery would like us to place hay in her litterbox one strand at a time. This is somehow very reassuring to her, but as you can imagine,becomes highly impractical. If we move at a normal pace, she becomes flustered and overwhelmed and bats the hay right out of our hands. 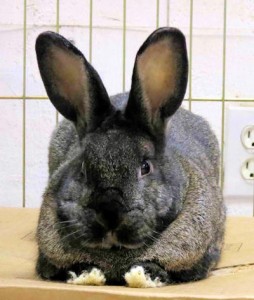 Margery has developed close ties to only certain humans whom she will let per her, but only if a specific scripted routine is followed. She’s never bitten anyone – ever – but puts on a great and scary display of boxing, batting, grunting, and other intimidating acts.