Little Piglet’s frail body finally gave up and he went over the Rainbow Bridge this weekend.  We are deeply saddened by this unexpected loss and will always remember this two-pound rabbit for the fighter that he was.  Piglet was an amazingly sweet little man and so tolerant for all the medical treatments that he received. 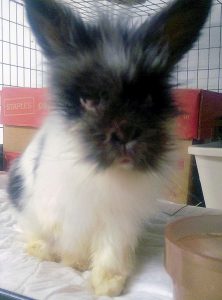 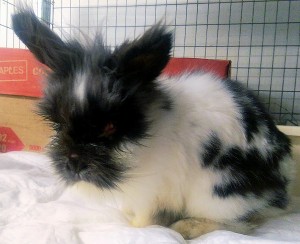 Update (January 31):  The little man is doing much better now!  His skin condition is completely cleared up and his urine-burned rear end is also much improved.  Scarring has caused some disfigurement of his vent and that’s causing him to occasionally urinate on his feet.  He still has discolored fur on his back feet and tail, but this will clean up eventually.  He needs bathing only about every other week now.  His left eye still has a problem with the third eyelid, but it isn’t infected any longer and doesn’t seem to be bothering him.  His incisor removal went smoothly and there is no sign of them growing back.  He’s still learning how to eat without them, though, and I have to cut up his lettuce, hay, and carrots.  Unfortunately, he is still reluctant to use a litter box and we have to change his bedding twice a day — bed pads are expensive!  He is a friendly little guy and has made friends with a big black girl named Daizy.  (He has a face that reminds me a lot of Angry Cat.  And he is so tiny.  He is only about 2.5 lbs. and absolutely adorable.)  If you would like to help, click to donate especially for him.  Thank you for your support. 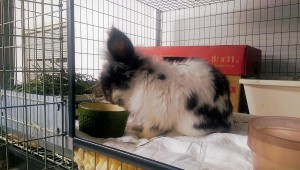 Update (October 30):  Piglet is progressing nicely!  The giant scab on his nose has fallen off and his urine scald is clearing up also.  His left eye is still swollen and red, but doesn’t appear to be infected.  Unfortunately, his maloccluded teeth are growing back just as badly as they were before being trimmed.  He is scheduled to be neutered on Tuesday and his incisors will be permanently removed.  It’s a somewhat involved operation to get the entire tooth out and he won’t be too comfortable right after the surgery, but his life will be MUCH better in the long run!  Thank you to everyone who has made a special contribution to his veterinary bills and care!!!!

Piglet was found as a stray and turned in to a vet’s office in NW Ohio.  Piglet was emaciated and suffered from severe skin and upper respiratory infections.  When he arrived at the vet’s office in September, he also had badly overgrown teeth.

The staff at the vet hospital did all that they could do to save him despite being told that it would be best to euthanize him.  The vet’s office contacted Keith Zimmerman, a Buckeye House Rabbit Society fosterer, to see if we had room to take him.  One look at that sweet little face and we knew that Piglet needed help from BHRS.