It is with sadness in our hearts that we share the news that our sanctuary rabbit, Pumpkin (AKA Mrs. Pumpy), has passed away.  She was eleven and a half years old. 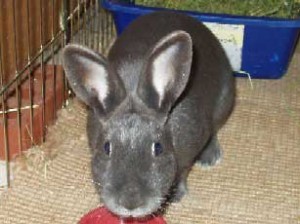 Pumpkin came to us in November of 2005 from a mass rescue of “meat rabbits” by the Logan County Humane Society.  Pumpkin never overcame her feral rabbit side and always remained at a distance and unsociable with humans and other rabbits.

After several years in foster care, we decided that it would be best if Pumpkin remained in our home to live out the rest of her years and placed her into our Sanctuary program.  She stayed with us for over ten years.  In the time we had her, Pumpkin did become very attached to our dogs.  She liked playing with them and teasing them at her level.

The last several months, her health began to slip.  We went through several battles with stasis, from which she always recovered.  Arthritis made it difficult for her to get around.  She passed away peacefully in the night.

Thank you to all of Pumpkin’s sponsors.  We will surely miss our dear old Mrs. Pumpy.

We rescued Pumpkin and seven of her siblings on November 26th, 2005, from the Logan County Humane Society after they had been seized from a meat rabbit operation that was operating under poor conditions. All of the buns were wary of humans since they’d never been handled as pets. Although the others were eventually adopted, Pumpkin had an attitude and was always skipped over. She was quite distant and would growl, charge, and box during any attempt to handle her. Sometimes she would scream when she was picked up.

Pumpkin did, however, seem to like dogs, and since we have five of them, she had plenty of company. She would be completely at ease around them, even playing with them and teasing. At one point, we moved Pumpkin from our foster population in the outbuilding into the house, hoping that more frequent interaction with humans would put her at ease. It did not work. She is still averse to humans (and other rabbits).