After much debate, we made the hard decision to euthanize Barley.  His medical issues were multiplying and it was affecting his quality of life.  It wasn’t a decision we took lightly and both Kristen and Stephanie were with him until the very end.  This is truly the hardest part of loving animals.  He was given the best last day with all the treats he could eat. The only time he was not eating was when he was sleeping.  When the time came, he faded away peacefully. 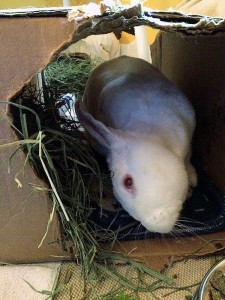 New to our Sanctuary Program

Barley is a very gentle, sweet man who has developed an extreme head tilt due to neurological problems. The head tilt came on suddenly, but he’s adjusting to the physical changes.  Barley is very accepting of back and neck massages.  He might not be able to get around like he used to, but he is giving it his all.

Barley is a big beautiful New Zealand white or REW (red-eyed white).  Barley was adopted out with his sister, Hops, in 2015, but was returned after his sister passed away.

Despite his delightful demeanor, he is not afraid to tell you when he doesn’t like something.  With proper care, his head tilt is manageable and Barley can continue to be happy, carefree rabbit. 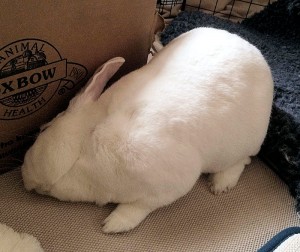 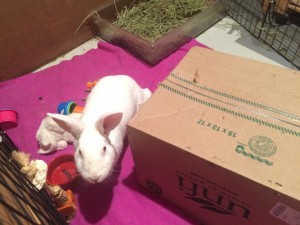